The last six months have been pretty awesome considering the number of great mountain bikes that we have had the opportunity to ride. Couple those rides with jaw dropping destinations like Sedona, AZ, which we have already visited twice in 2016 and its hard to not reflect with a smile.

Nostalgia aside, let’s talk about the Yeti Cycles SB4.5C. Some early reviews suggested the bike missed its mark, primarily citing unwieldy steering and poor climbing ability.  Those early reviews are widely considered rubbish at this point and we can state with the conviction that this bike belongs on your must ride list. This may be the best climbing Trail bike we have ever ridden, but to be fair and objective, we have some more demo’s to do and the Pivot Cycles Mach 429 Trail is on the short list.

We arrived at the 2016 Sedona MTB Festival and quickly found that the festival had exploded in popularity since the prior year. That is great news for Sedona, the organizers, and the mountain bike community. Sedona is an incredible mountain bike vacation destination and a perfect venue for a mtb festival.

For reasons that we can’t explain, we gravitate towards 29’ers at demo events and 2016 happens to be a great year for aggressive, short travel 29’ers that simply rip. At this point, and in this category,  we have demo’ed the Evil Following, the IBIS Ripley, the Intense Carbine 29 and the Yeti Cycles SB4.5C. All great bikes. The Evil Following and the Yeti Cycles SB4.5C are geometrically more in line with my riding style and what I want out of a trail bike. You can read more about our thoughts on the Evil Following here.

By early afternoon, I had my hands on the SB4.5C and we were on the shuttle (piloted by Drunk Cyclist) to the Yavapai Vista trail head and the Slim Shady Trail. The plan was to descend Slim Shady and then climb towards Chicken Point via the HT and Little Horse Trails and then descend Broken Arrow back to the shuttle. The light weight of this bike was immediately apparent. It is remarkably light and accelerates like few bikes I have ridden. Navigating the descent on Slim Shady and its occasional chunk, drops and tight turns, I quickly felt at home on the bike and there was no noticeable characteristic to point out that I was on wagon wheels. It is well known at this point that Yeti’s Switch Infinity suspension platform is a winner and it performed flawlessly as expected on the descent. The bikes most pronounced capabilities came out as soon as we started climbing, connecting with HT Trail and then Little Horse Trail, one of the more technical climbs in the area. The bike’s light weight made it possible to accelerate on the climbs and the Switch Infinity enabled rear tire stuck to the sandy ground like glue. You also come to appreciate the classic long top tube of a Yeti in these situations which allows you to move forward and back on the bike allowing effective use of your hips to propel you over the rocks and ledges that seem everywhere on these two trails. The climbing capability of this bike was shocking. I was able to climb over obstacles that I had no business even attempting. I eventually became over confident and ended up tipping over into a cactus which slowed my roll a bit. We soon topped out at Chicken Point and made the descent down Broken Arrow and back to the shuttle van. Awesome ride. 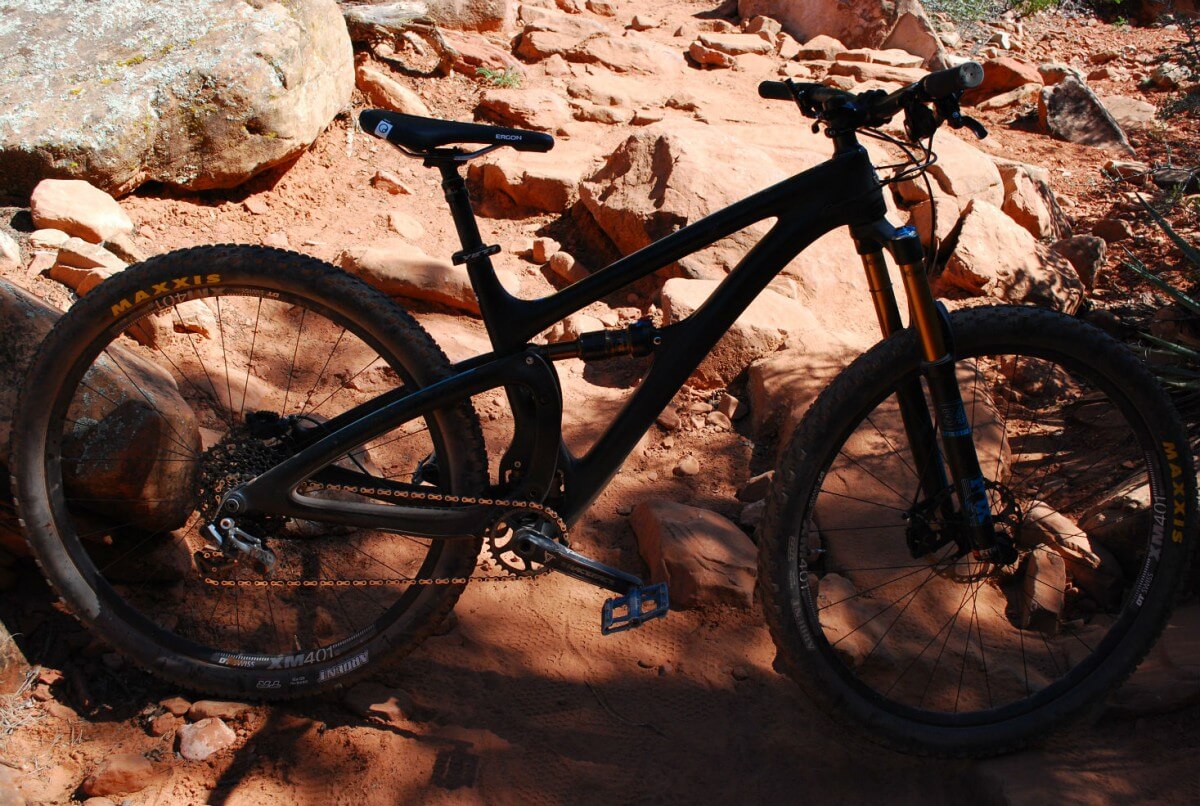 Dark, smooth lines on the SB4.5C

On the second day, I decided to ride the Intense Carbine 29 and we took off on the Chuck Wagon shuttle headed for the west side of town. The only size Carbine available was a large and it was simply too big for me. The trails we rode were longer than the previous days trails and maneuvering the large was quickly sapping my energy. At 5’10 and with long legs for my height, I can typically swap between a medium and a large and get away with either.  Not so in this case. We won’t make any judgment on the Carbine until we can ride a medium.

By early afternoon, I was once again back on the SB4.5C, headed to the Hogs trails above the Broken Arrow trail system. Hogs offered a lot more steeps, off cambers and exposure than the previous days ride and being on point was important. After a lazy climb up Broken Arrow, we entered the High on the Hog Trail and it was game on. Again, the bike performed admirably. At no point did the bike feel unwieldy or difficult to maneuver in the quickly changing and challenging terrain. Hogs is famous for short, steep, twisting, techy descents and the bike handled everything with ease. Best bike of the weekend. Hands down.

The Yeti SB4.5C on High on the Hog Trail

MTB-Vacations.com Verdict: In marketing this bike as an XC capable Trail bike, it is possible that Yeti has pulled in a group of XC riders and reviewers that were expecting something lighter and more nimble than the SB4.5C. Thats the only way we can explain the conflicting reviews on this bike. This bike is a very capable Trail bike and one of the best we have ridden to date. This bike had us dreaming about big Colorado backcountry rides like Monarch Crest or Crested Butte where we are confident it would excel. There are two downsides to this bike that give us pause. The first is the lack of ISCG05 tabs preventing the addition of a chain guide\bash guard and the second is the price. A bash guard is important for Colorado riding and this bike is considerably more expensive than an Evil Following or a Pivot Mach429 Trail. We feel you owe it to yourself to demo this bike if you are in the market for a capable, aggressive, short travel 29’er. It is definitely worth your time. .


Warning: Use of undefined constant comment_notes_before - assumed 'comment_notes_before' (this will throw an Error in a future version of PHP) in /home/customer/www/mtbv.com/public_html/wp-content/themes/mbv/comments.php on line 74

Warning: Use of undefined constant comment_notes_after - assumed 'comment_notes_after' (this will throw an Error in a future version of PHP) in /home/customer/www/mtbv.com/public_html/wp-content/themes/mbv/comments.php on line 75

Warning: Use of undefined constant fields - assumed 'fields' (this will throw an Error in a future version of PHP) in /home/customer/www/mtbv.com/public_html/wp-content/themes/mbv/comments.php on line 76

Warning: Use of undefined constant comment_field - assumed 'comment_field' (this will throw an Error in a future version of PHP) in /home/customer/www/mtbv.com/public_html/wp-content/themes/mbv/comments.php on line 77